This product is a film-coated tablet, which is white or yellowish after the coating is removed.

Of the total 12,879 cases, 249 cases (2.58%) were found to have adverse reactions including abnormal clinical examination values. These adverse reactions include gastrointestinal symptoms such as diarrhea in 112 cases (0.87%) and skin symptoms such as rash in 29 cases (0.23%). In addition, abnormal clinical examination values include GPT in 78 cases (0.61%), GOT in 58 cases (0.45%) and eosinophilia in 26 cases (0.20%).
(1) Serious adverse reactions:
① Shock: due to the possibility of causing shock (② Allergic symptoms: There is the possibility of allergic symptoms (including dyspnea, general flushing, angioedema, urticaria, etc.) (③ Skin lesions: There is the possibility of skin mucosal eye syndrome (Stevens-Johnson syndrome, ④ Blood disorder: there is the possibility of agranulocytosis (⑤ Renal dysfunction: Due to the possibility of causing severe renal dysfunction (⑥ Colitis: It may cause severe colitis with bloody stool, such as pseudomembranous colitis (⑦ Interstitial pneumonia, PTE syndrome: there is the possibility of interstitial pneumonia, PTE syndrome ([0.1%] respectively) with symptoms such as fever, cough, dyspnea, abnormal chest X-ray, eosinophilia, etc. If the above symptoms occur, the drug should be stopped and appropriate treatment such as glucocorticoid should be taken;
(2) Other adverse reactions: The incidence of adverse reactions is common in 0.1 ~ 5%, but rare below 0.1%.
Allergy: common rash, urticaria, erythema, rare itching, fever and edema;
Blood: common (0.1% ~ 5%) eosinophilia and rare neutropenia;
Liver: The elevation of ALP/GPT and AST/GOT is common, and jaundice is rare;
Kidney: rare increase of BUN;
Digestive system: diarrhea, stomach upset, nausea, vomiting, abdominal pain, chest burning, loss of appetite, abdominal fullness and constipation are common;
Dysbacteriosis: rare stomatitis and oral monicoccosis;
Vitamin deficiency: rare vitamin K deficiency (low prothrombinemia, bleeding tendency, etc.), vitamin B deficiency (glossitis, stomatitis, loss of appetite, neuritis, etc.);
Others: headache, dizziness.

Store up
Keep in a cool, dark and dry place (no more than 20℃ away from light).

This product is the third-generation cephalosporin for oral administration, which has broad antibacterial spectrum and antibacterial activity against some Gram-positive bacteria and negative bacteria, especially Streptococcus in Gram-positive bacteria (except Enterococcus), Pneumococcus, Neisseria gonorrhoeae, Escherichia coli, Klebsiella, Serratia, Proteus, and Influenza. Its mechanism of action is to prevent the synthesis of bacterial cell walls, and its action is This product has strong stability to β -lactamases produced by various bacteria.
Toxicological research
Toxicity: SD rats were given 100 ~ 1000 mg/kg orally before pregnancy and early pregnancy, and 320 ~ 3200 mg/kg orally during organogenesis, perinatal and lactation. There was no effect on the fertility of rats, no teratogenic effect, and no abnormality in the growth, development and reproductive capacity of newborn rats. 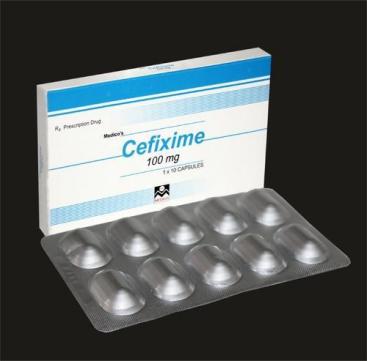